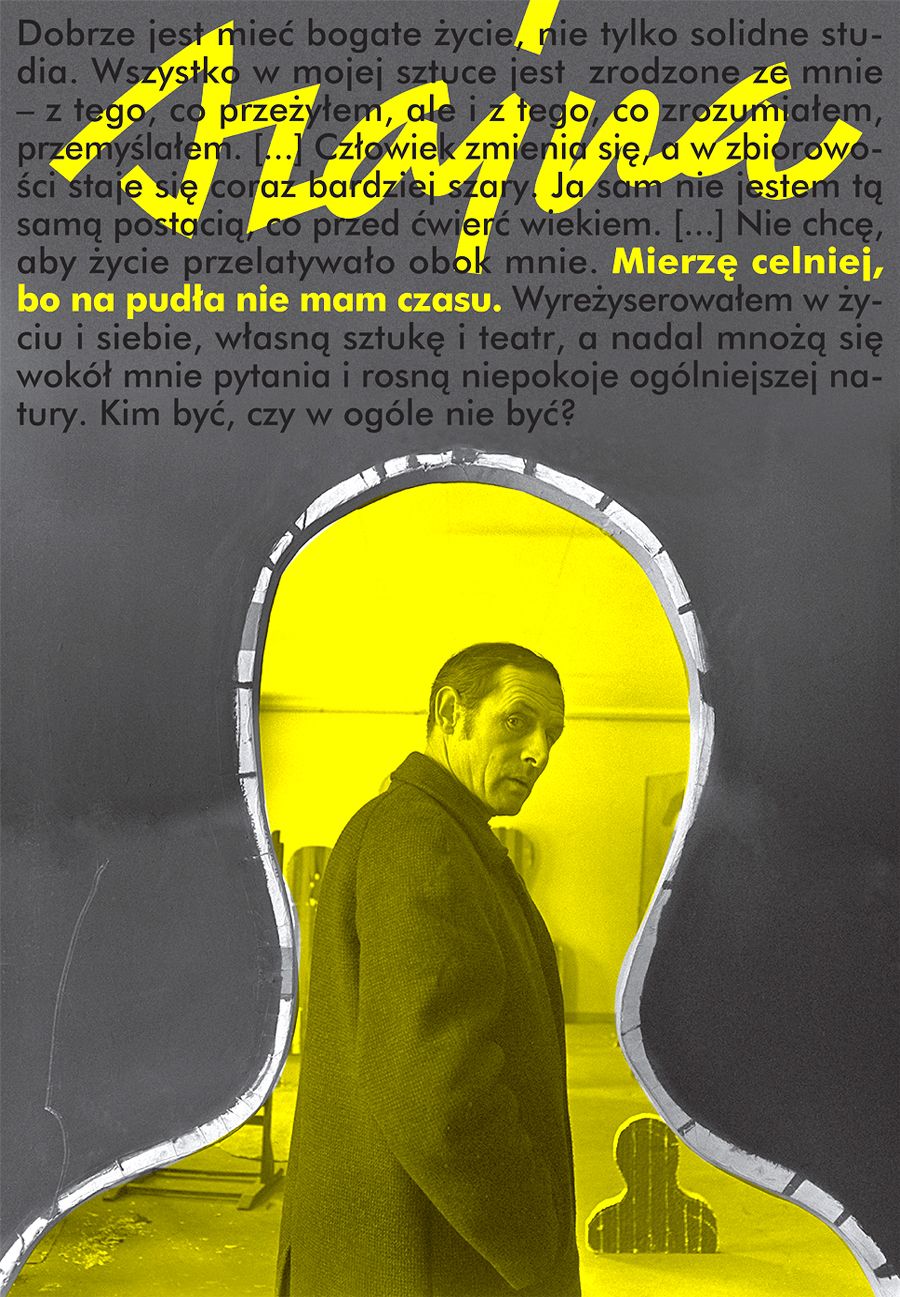 Szajna: I aim bang on target – I have no time for misses shots

Exhibition organised on the 100th anniversary of the birth of Józef Szajna, one of the most important artists of post-war Polish art.

The exhibition is accompanied by a lavishly illustrated publication (priced at PLN 10). The folder contains an essay by the curator about Szajna and his art, which is a record of his struggle with the trauma of war.

The human being always remained at the centre of Józef Szajna’s interests. His oeuvre, marked by the Auschwitz experience, was one continuous attempt to understand human nature.

Reminiscences of war, images of civilisation as waste, and a dialogue with the artistic tradition – were what defined his aesthetic: ‘Everything in my art has its source in me,’ he commented, ‘in what I have experienced, but also what I have understood and thought out. […] The individual undergoes changes, and, in the society, becomes progressively duller. I am no longer the same person that I was a quarter of a century ago. […] I don’t want life to pass me by. I aim bang on target since I have no time for missed shots. I have staged myself, my life, my art, and my theatre [...].”

Szajna’s artistic works focused on the body and on matter. Through their enhanced sensuality, they drew on the audience’s intellect and sensitivity. Our exhibition presents Szajna’s variations on the human figure and face.

On the example of theatrical figures, installations, assemblages, and photographic documentation of spectacles, as well as works created on paper, we familiarise our visitors with the repertoire of motifs and conventions drawn upon by Szajna’s TE-ART. All these projects are, on the one hand, the visions of an idealist and Utopian who believed in art’s power to change things; on the other – they are reflections of a genuine satirist, with a tendency towards the grotesque.

Szajna’s anti-aesthetic served to convey ethical values. In his art, he asked questions concerning humanity, warned us against the ever present, catastrophic threat of war, formed accusations against totalitarian systems, and attacked present-day consumerist, careerist attitudes. His art is still topical today, and will remain so – since, as the artist put it, ‘humans neglect to care for themselves’.

THE WAR. Auschwitz and Buchenwald camp prisoner during WWII. The war trauma left its mark on Szajna’s artistic output in the form of a programmatic aesthetic of ugliness and camp-life reminiscences.

THE VISUAL ARTS. He worked in the field of ‘matter painting’, as well as creating collages and assemblages, for which he used non-artistic materials. The resulting works evoked such topics as catastrophe, destruction, decay, omnipresent waste, death, and the atrocities of war. They commented on the contemporary civilisation’s negative impact on the human being. Szajna’s installations, performances, and spectacles dealt with similar subjects.

THE THEATRE. He worked in the theatre from the very beginning of his artistic career, first as a set designer, later – as a director. His theatrical projects are characterised by powerful visual expression and innovative formal solutions: ‘I turn the stage scenery into a spatial composition, and the actor’s surroundings – into a kind of environment.’ He defined the theatre as ‘living, thinking matter’. He replaced traditional plots with an accumulation of metaphorical visions. ‘In my theatre, the word becomes image, and the image becomes word,’ he explained.

TE-ART. This is a term Szajna used for his own output. It emphasises links between theatre and other visual arts. He aimed at a synthesis of the arts. Uniting opposites and combining many disciplines was a characteristic quality of his oeuvre. He translated drawings into spatial compositions and set designs. His theatrical projects were inspired by a kind of thinking typical of poster art, based on ‘graphic shortcuts’, signs, and symbols.

Motifs from his paintings, objects, and spatial forms recurred in his theatrical sets, while elements of those latter were incorporated into his installations. Those most frequent include artificial limbs, dummies, shoes, a ladder, a wheelbarrow, and semi-silhouettes. Grotesquely deformed human figures (both puppets and live actors, sometimes dominated by objects) were a constant element of his spectacles. 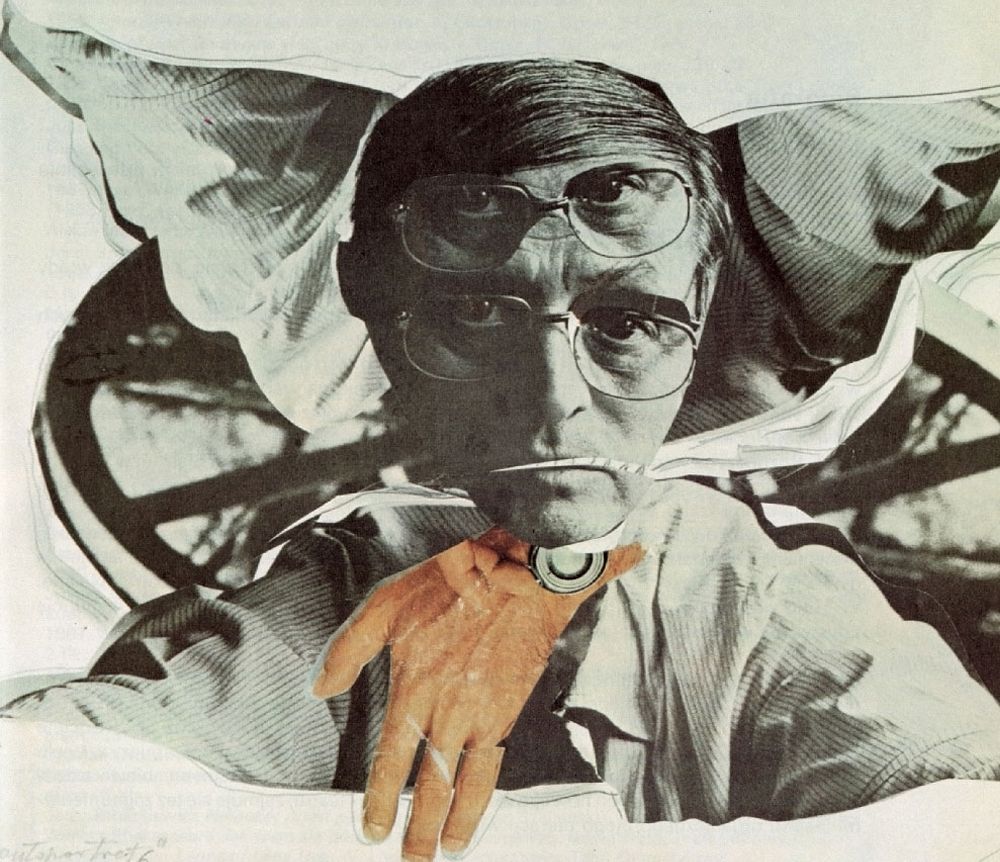 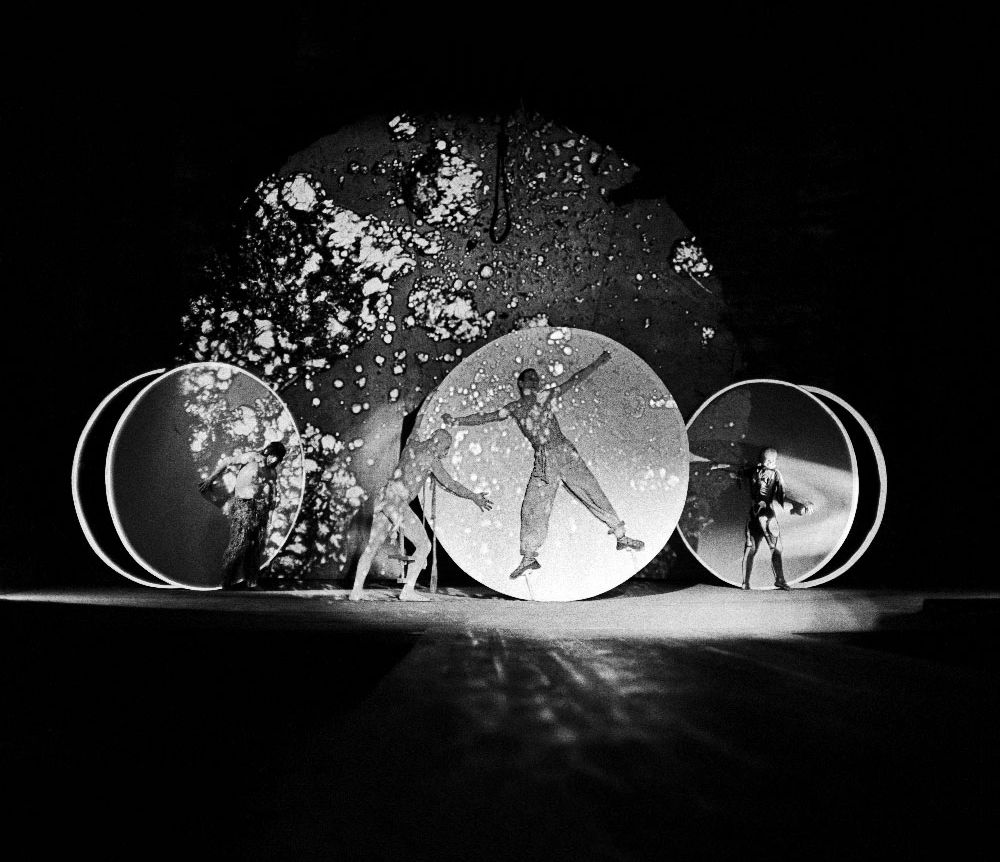 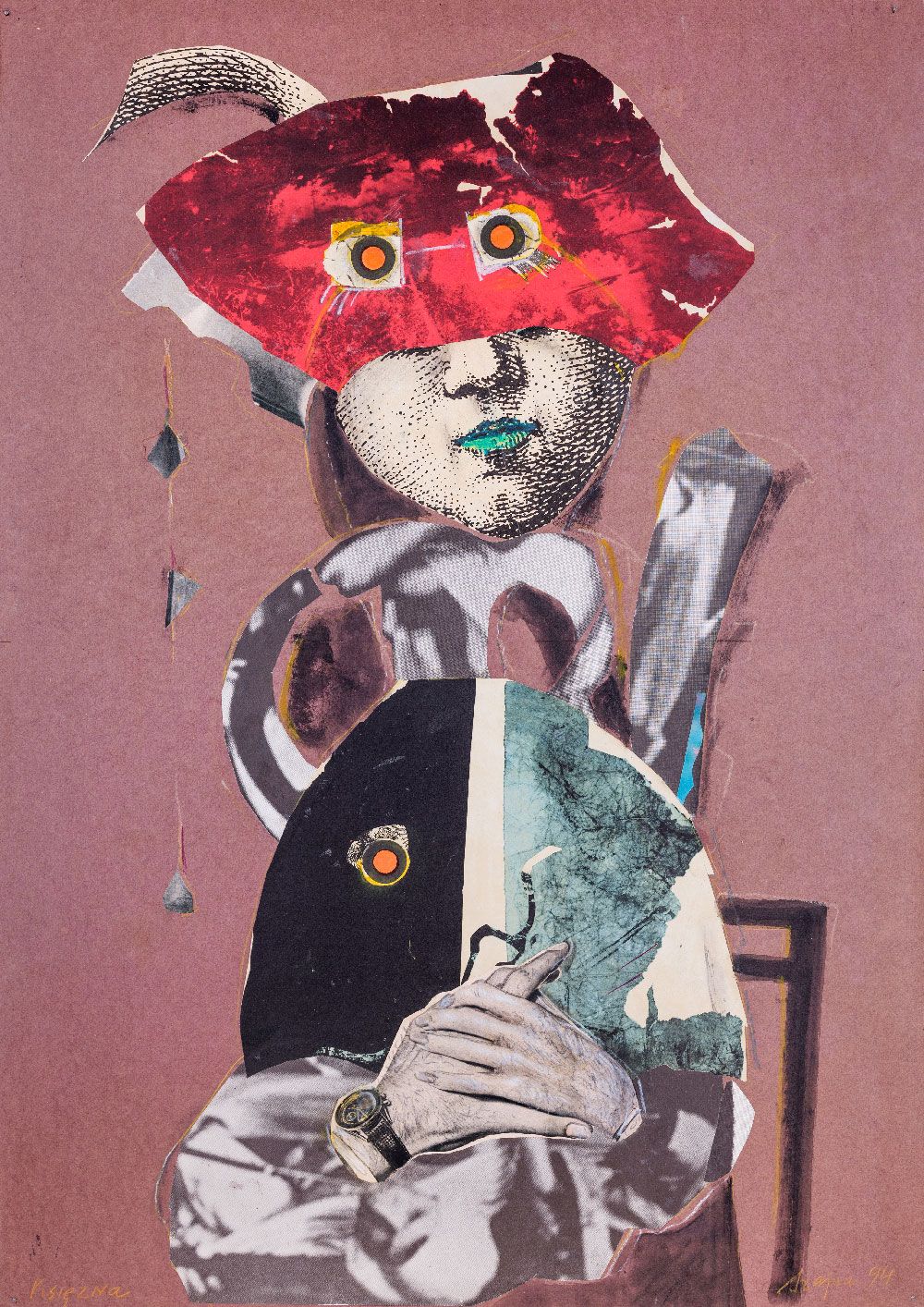 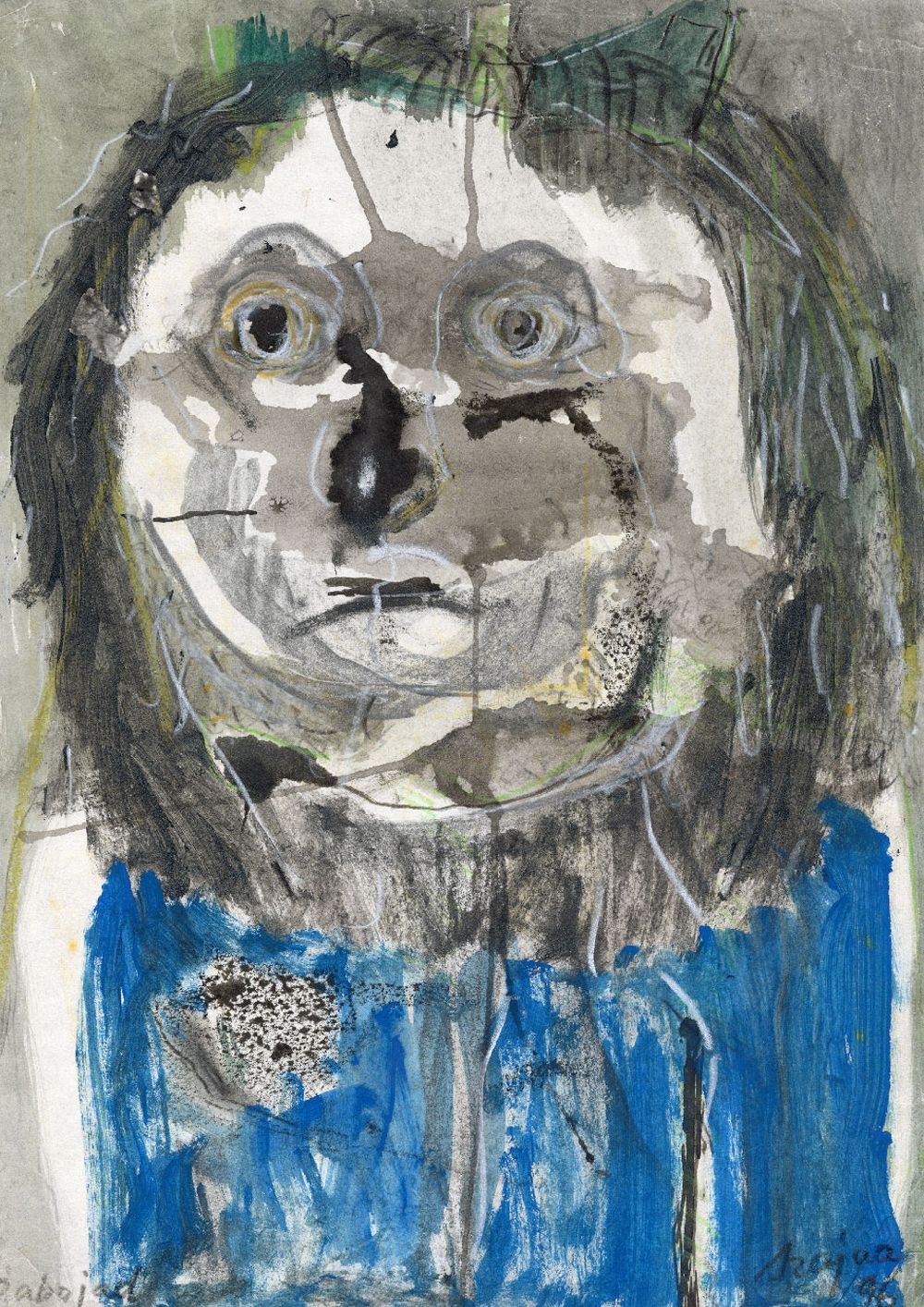 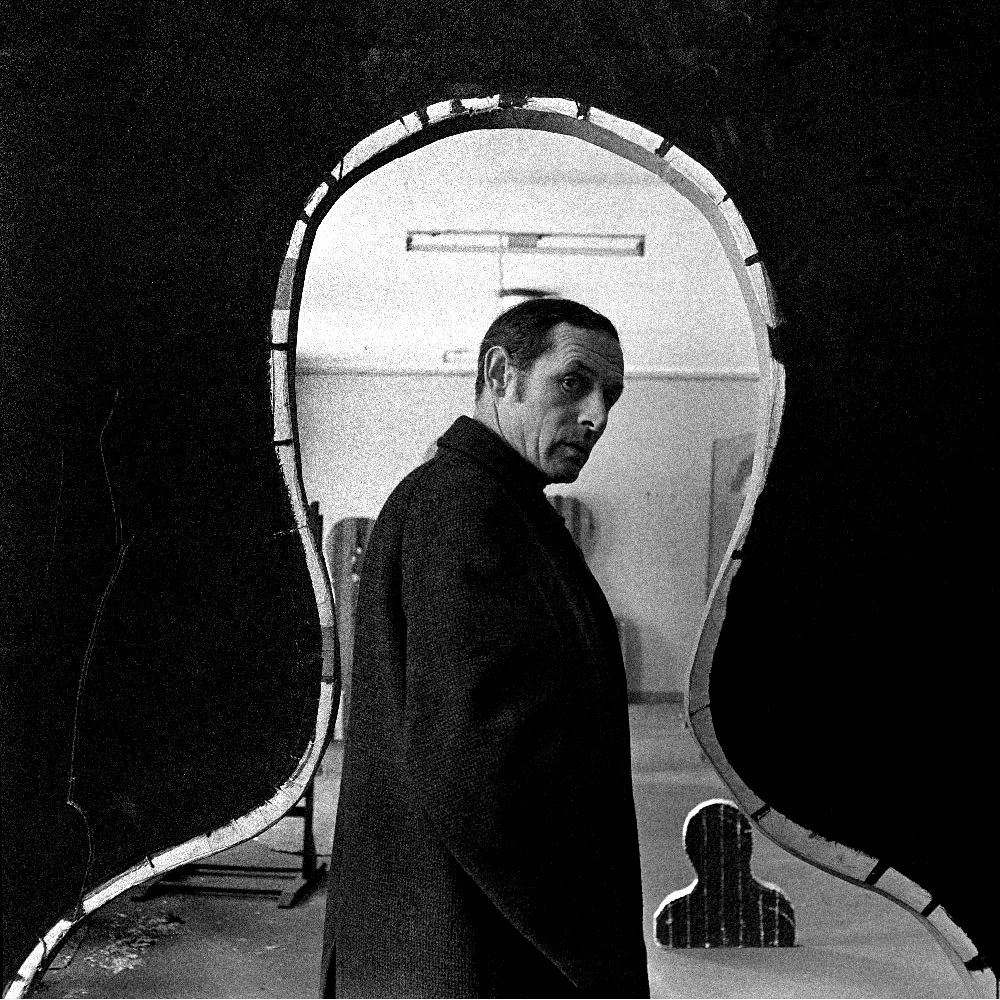 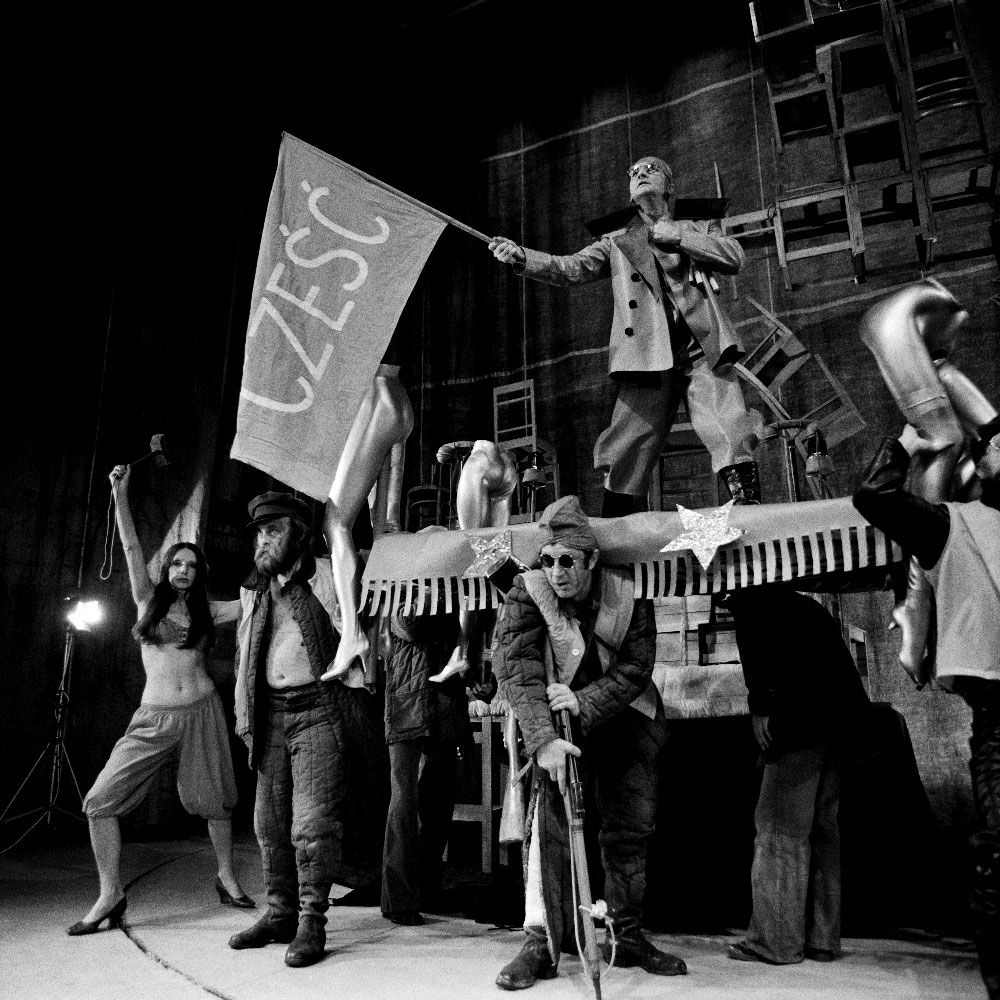